From the look of it, Invader’s Revenge looks like a simple Space Invaders clone. However, simply watching the looping intro screen you can see that the ship can accelerate to the top of the screen. The color scheme does change as things move up and down the screen, just like in Space Invaders, though. There also is a 2 player mode. Time to dig in!

Upon playing the game here is no sound for me, likely due to the Coinops emulation I am using. The game controls just like Space Invaders and is single screen too. There are, however, less enemies on screen at a time but they shoot at you a bit more frantically. There is also a mothership at the top of the screen that seems invincible to fire. At the bottom of the screen there is a fuel meter that depletes as time goes by, as bombs are dropped and as invaders swoop down an steal a fuel cell.

As you kill the invaders during the wave, the remaining become progressively faster. Also, there are certain waves where the invader will dive bomb at you once you shoot them down, which also happens if any invader steals a fuel cell. You also have the ability to hold down the fire button to propel yourself to the top of the screen. While I did not find a use for it so early on in the game, it does seem like you could devise some cool tactics with it. I also did not find a way to replenish fuel, so I received game over and got about 1100 points.

– Cons –
– Still comes off as a cheap clone
– Unintuitive continuation techniques; no clue how to refill fuel

– Single Credit Synopsis –
In the end of my single credit, Invader’s Revenge comes off as simply an uninspired Space Invaders knockoff that doesn’t really stand up to the original. Perhaps if I knew how to increase my fuel in order to survive longer I might be tempted to tackle this game again. However, as it stands it’s highly unlikely that I’ll be pouring any time into this one again. 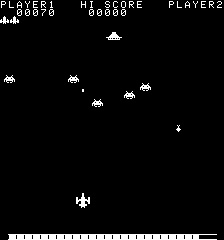