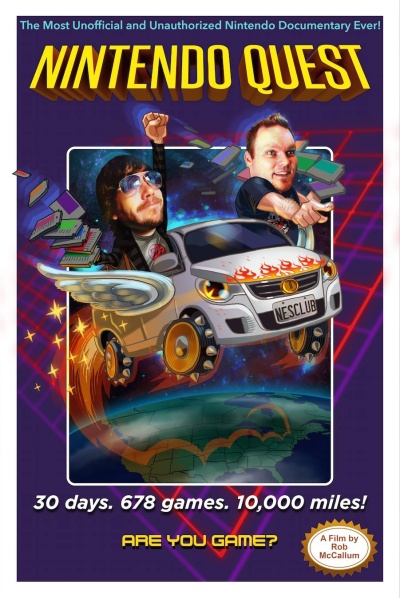 The Nintendo Quest is a pseudo video game documentary that was funded on Kickstarter at over $40,000. It follows the quest of Jay, who is attempting to collect the entire licensed Nintendo Entertainment System library in just a single month without the use of the Internet.

*DISCLAIMER* – This review will contain spoilers to the film as well as look at everything in an impartial way. No rose colored glasses here. You have been warned!


Just let me get out of the way that overall, I really enjoyed the film! However, there are a bunch of things that went through my mind as I watched, especially as I have been an avid NES collector for over 20 years. 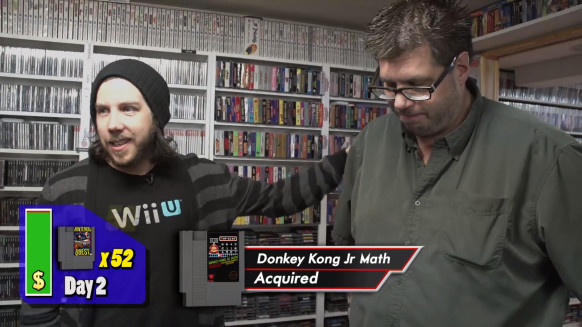 First the pros. This film was amazingly shot and edited. Everything about this has a professional look and the soundtrack is killer. I like the premise of someone having a finite 30 days to collect the entire NTSC NES library from scratch without Internet purchases. It’s extremely respectable that the main protagonist of the film, Jay, doesn’t just settle for sticker price on the games but attempts to get bulk deals; which is what any avid game collector would do. 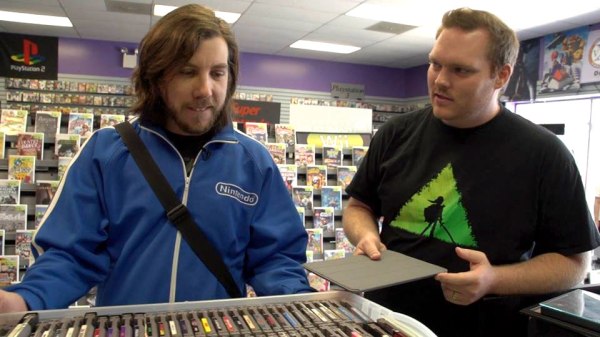 Also the fact that Jay takes the time to clean the games during the filming is interesting and definitely part of his character as a person. What’s great is this is exactly how I am, as I need my games to be clean immediately. Also, it’s a great aspect when Jay shared some of his personal life with the world during the shooting of this film. It really let’s you relate with him on a whole different level, than just as a game collector. 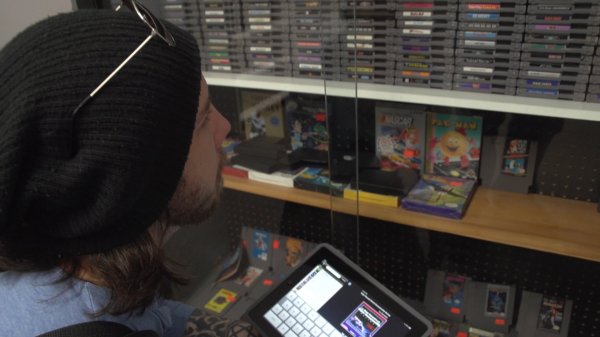 The whole adventure aspect was really fun and it allowed the viewer to come along for the ride. It was something that we’ve seen done before in YouTube channels and such, however this is the true film experience. Having the little competition background allowed it to have a more cinematic quality tension, which is necessary over a longer span.

Now for the cons. First off is the major glaring issue that really bothered me throughout the entire film. It was about the second time that Rob, the creator of the film, showed the “Top 20 rarest NES games” list. This was because Jay kept mentioned what rare games he had left to pick up and kept saying Jetson’s. While I know that Jetson’s is uncommon, it’s not top 20 rare, so I actually had to rewind and pause the film. 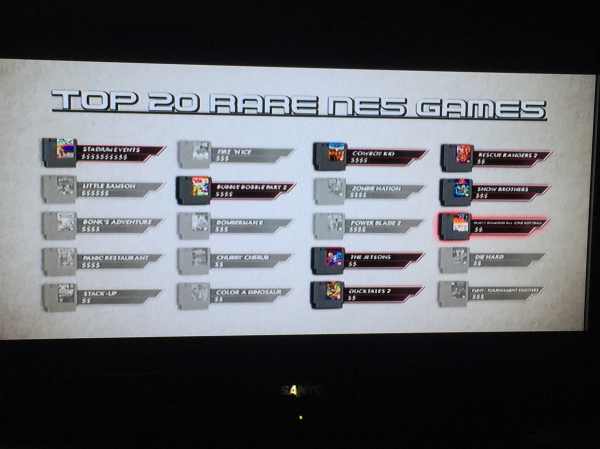 This list is a decent list but top 20 rare games? Chubby Cherub may have a rare box but the cart (the premise of the film is cart-only) is barely uncommon; the same with Stack Up. There are a ton of games that are rarer, such as Sword Master, Dragon Fighter, even Gun Nac! It was also weird how the NES cart counter seemed to increase more than the carts that Jay got at the time. I assume that they couldn’t get everything on camera so it’s understandable to have a few omissions of games with there being well over 600 individual cartridges. Really most of the omissions could be argued for ages, however….

The glaring mistake missing from this list, and what basically had me sidetracked for the remainder of the film; the omission of Flintstones 2: Surprise at Dinosaur Peak. This was especially evident since Jay mentioned Jetson’s, another Hanna Barbara cartoon game, and really made it stick out. For those who aren’t “in the know”, Flintstones 2 is the 2nd or 3rd most expensive NES game behind Stadium Events and continually fluctuates with Little Samson with prices around $700-$1000 online. The fact that Flintstones 2 wasn’t included in this list, or mentioned in the film, is almost insulting to hardcore collectors as it makes it seem like the filmmaker is hiding something. What’s even more alarming is that the Indiana collector at the second half of the film has a Flintstones 2 in his prestige case. Also after the completion of the quest,  Jay also has a copy of his own in his high dollar case! Was this game not purchased during the initial competition? It definitely wasn’t in the list of games he didn’t get at the end and I’m sure getting a top dollar cart like Flintstones 2 would have been a huge deal, as it would have been to any serious NES collector!  It’s just a huge glaringly obvious omission and completely changed my outlook and tone of the film for sure. 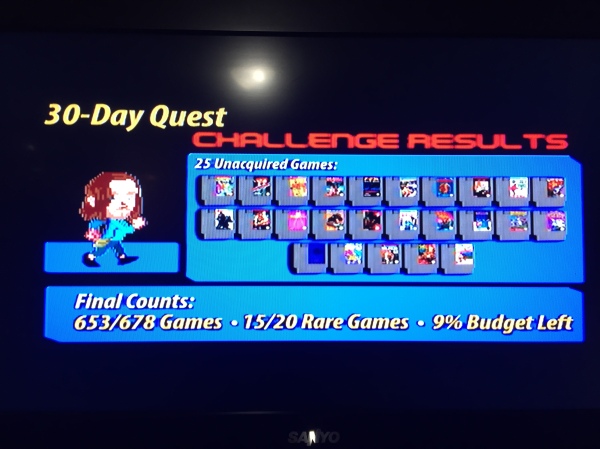 Another spot that also accentuates this “hiding of certain rare games” from the quest was when Jay lies on the phone when making a game deal. We have all exaggerated to get a good deal from someone, but this just seemed weird in the film when the entire premise depends on the audience trusting that everyone is following the rules setup in the film. All the personal stories in the world do not help when you have a person of questionable moral fiber, which happens with the audience after he lies to get that deal. From that point on, you keep waiting for him to do other shady things; which could have happened off camera. Jay even talks off camera later in the film to get a deal. It’s a “Who’s to say?” moment, and definitely could have been avoided. Also, Rob’s anger and comments toward a fellow “rival” collector who simply got there first, makes him come across as vengeful and almost spiteful. Saying after the fact that the collector “Wanted to be made to look like a villain” seemed tacked on and just thrown in just to save face.

One additional small little factual error that I noticed is that they mentioned Thor Aackerlund was the “winner” of the Nintendo World Championships competition. That is slightly misleading as Thor was the winner for his age group; however there were multiple winners of that competition. To the filmmaker’s defense though, Thor is definitely the most known out of any of the winners.

Overall, The Nintendo Quest was an awesome movie and extremely fun. It was a very competent piece that draws you in and makes you want to also go out and collect NES games! The next time I watch it, knowing about all the flaws, I’ll be able to enjoy it more. Keep in mind that everything I mentioned really is over-analyzing, as many of the flaws are pretty minor. Any normal Nintendo fan (not a crazy collector like me) will definitely enjoy this film and this story is masterfully done! 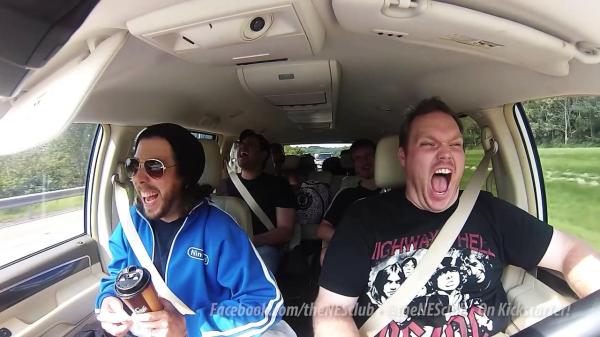 The Nintendo Quest has been doing a tour and if they are in a town near you, be sure to check them out. Just make sure to wear some rose colored sunglasses and you’ll be right as rain!